The New York Times: In October, the venerable scholar Susan Gubar profiled me and FLAT for her monthly “Living With Cancer” column in The New York Times. Gubar is a no-nonsense advocate of cancer patients everywhere. She embodies that rare combination of wisdom, wit, and kindness. I’m honored that she called FLAT a “landmark book” that persuaded her that “breast cancer care must be improved.” 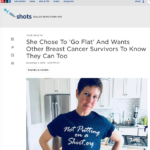 NPR: This Q&A for NPR Shots reached what felt like a new demographic, which was exciting. Thanks to reporter Rachel Cohen for asking such great questions and for her editor, Carmel Wroth, for assigning the piece. Hoping to get the chance to work with NPR in the future!

Do I Have to Reconstruct My Breast After a Mastectomy? 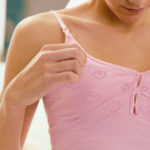 U.S. News & World Report: This question “do I have to reconstruct” is so simple and yet so complex. No, of course you don’t need to reconstruct. But, sheesh, no one tells us it’s okay not to. Leaving women to sort it out for themselves while, at the same time, digesting a cancer diagnosis. Luckily, that grave omission of a basic choice is changing thanks to articles like this one – which prominently features me and FLAT (naturally).

Breast Cancer Patient Opens Up About Alleged Malpractice in Surgery 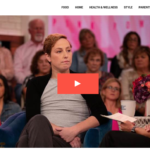 The Today Show: In early October, I went on live national network television with Kim Bowles, the woman I profiled in my Cosmopolitan.com investigation on sexism in breast cancer care. We spoke to the importance of women’s autonomy in health care decision-making. The bulk of the segment is Kim’s story, but I show up in minute 6.5 to lay down some stats. 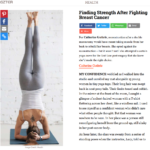 Health Magazine ran an excerpt of FLAT in the October 2018 issue. This meant a lot to me because my first bona fide magazine journalism job was as a special projects researcher for Health Magazine back in 1997 when the magazine was based in San Francisco, California.

Pink Is Not Her Color 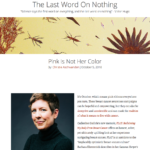 Last Word On Nothing, a science writing blog, let me go full-on feminist in this Q&A with Christie Aschwanden, a kick-ass science writer: “To be clear, I’m not anti-reconstruction; I’m pro-information. To step into the role of a fully educated health care consumer, a breast cancer patient first needs to be informed of the pros and cons of each option. Unless physicians check their sexism at the door, they won’t be able to fully inform breast cancer patients about the surgical options.”

On Going ‘Flat’ After Breast Cancer

89.3 WFPL: This 20-minute interview (transcript here) with Laura Ellis, a senior producer at Louisville’s community supported NPR affiliate, was a highlight of my book tour. Ellis is an insightful journalist with a quick wit. We hit it off immediately. She also has an insider’s perspective having dealt with her own breast cancer diagnosis. Unlike me, she chose to reconstruct, and we had a great conversation about the importance of presenting reconstruction as an option, not a requirement.

AfterEllen.com spoke with me about the lack of queer representation in cancer memoir and the dearth of feminist discourse in breast cancer care. “It was the cognitive dissonance between these two worlds – the queer community’s radical body acceptance and the breast cancer community’s policing of cis-het femininity – that gave rise to my book.”

Why I chose to “go flat” after my Mastectomy 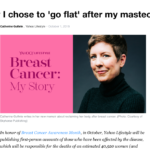 Yahoo! Lifestyle: Thanks Beth Greenfield at Yahoo!Lifestyle for excerpting “FLAT: Reclaiming My Body From Breast Cancer.” I love talking with health journalists who really get me and understand the importance of giving breast cancer patients the best (most complete) information possible to make good health care decisions. 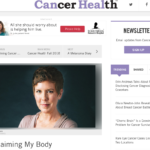 Cancer Health, a new quarterly magazine, featured an excerpt from FLAT in its Fall issue. If you want to read a free preview FLAT, this is a great way to do it! “Journalist Catherine Guthrie recounts her experience navigating two bouts of breast cancer and cultural expectations of femininity.”

I Didn’t Need a Double Mastectomy to Save My Life. But I Did It Anyway 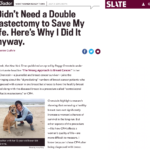 Slate.com published my personal essay back in 2014 when I was still drafting FLAT. I’m thankful to my editor at Slate for seeing the value in talking about flat as a valid choice for breast cancer patients at a time when doctors were wringing their hands about the number of women choosing double mastectomies.