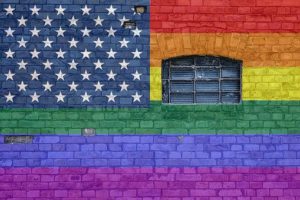 The panic of being outed as breastless

I spend time in breast cancer groups on Facebook filled with women who’ve gone flat. Many are out and proud, but others wring their hands about what will happen if they go out in public without their prosthesis. They don’t like wearing fake boobs, what women in the groups call “foobs,” but they are scared to be seen in public without breasts.

I do not want to minimize their fear. The panic of being “seen” or “outed” is real. And my intention is not to judge prosthesis as good or bad. (After all, queers know a thing or two about the joys of a good prosthesis.) My intention is to give women permission to do what feels good to them, not what feels good (aka comfortable) to other people. In that way, the flat movement and the queer movement have something in common. We want to be seen and accepted.

And when I say the “flat movement,” let’s clarify that (as far as anyone knows as of yet), the number of women choosing to go flat is NOT increasing. Historically in the United States, approximately 25 percent of women who undergo bilateral mastectomy and 50 percent of women who undergo unilateral mastectomy have chosen not to reconstruct, meaning they’ve gone flat on either one side or two.

The Power of Flat Visibility

What is shifting is the antiquated notion that women who go flat must hide their bodies. With the rise of women’s voices, especially in the era of #MeToo, women are coming out of the shadows. Flat visibility is about refusing to continue to buy into the narrative that women without breasts are disfigured.

In the past few years, several celebrities have gone flat in public ways, including Tig Notaro, Kathy Bates, and Anjelica Huston. Last year, Equinox gym built an ad campaign around a flat model, complete with mastectomy scars. And in the past two years, breast cancer patients who’ve chosen to go flat have been featured on the Today Show, CBS Sunday Morning, and on the front page of the New York Times. This is only the beginning.

The more of us who come out with our fabulous flat chests, the more we’ll emboldened those who are still in the closet. Again, wear the foobs if they make you feel beautiful! But don’t wear them like a hair shirt because you’ve been “disfigured” by cancer and are afraid to make others uncomfortable.

Take a page from the queer playbook and embrace your difference as your strength.