What Barbara Brenner Taught Me About Charity Walks

Thirteen years ago, in the spring of 2003, I interviewed Barbara Brenner, then executive director of Breast Cancer Action (BCA). The interview never ran. 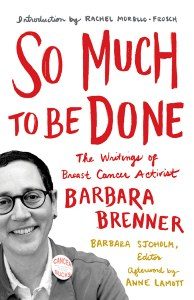 I was an optimistic, young journalist excited about her first investigative assignment. The topic was cause-marketing. The news hook was a brewing controversy surrounding Avon’s 3-day breast cancer events.

I’d pitched and sold the idea to a national women’s magazine. My editor loved it. The magazine slated the article for the October issue — Breast Cancer Awareness Month.

I spent six weeks researching, interviewing, and writing the 3,000-word feature. Brenner was front and center. Her message stressed the importance of women taking back their power from corporate America. I couldn’t believe such a bold, feminist message was poised to reach 1.4 million readers.

Then, a month before publication, my editor called to tell me the magazine killed my story. Avon was a new advertiser and the marketing team didn’t want to tarnish the new relationship. My interview with Barbara sank to the bottom of my hard drive. Until now.

I was reminded of the long-lost interview when, in April, BCA redoubled its efforts to get women to ask 4 questions before walking for charity. Then I found out the University of Minnesota Press was set to publish a collection of Barbara’s writings. Finally, last week, Karuna Jaggar, BCA’s new executive director, penned an op-ed for the Washington Post “breast cancer walks are a terrible way to fight breast cancer.”

So it only seems fitting that, for the first time and with the permission of the kind folks at BCA and Barbara Brenner’s family, I’m posting my long-ago interview with Barbara.* She won a life-long supporter in that 20-minute phone call. And, after all these years, her words ring just as true:

Q: Describe, in a nutshell, your chief complaint with cause marketing.

Q: What do companies gain?

Brenner: They gain profits. They do this to improve their bottom line. That’s what companies do. They gain a reputation for caring deeply about something other people care deeply about.

Q: How do you respond to those who might say, “who cares if companies make money, at least they’re giving back.”

Brenner: I would say that while I appreciate that point of view, we shouldn’t let companies off the hook. People need to think about whether or not companies using breast cancer to improve their bottom line is really helpful.

Q: What makes breast cancer such an easy target for cause marketing?

Q: Can you speak to what raising money for breast cancer through the sale of lipstick, yogurt, and vacuum cleaners says about how women are perceived by these companies? Is it valid or a conditioned response?

Brenner: It’s valid in that it works. These campaigns communicate that what women can do about breast cancer is to buy things. It’s a disservice to women.

Q: If a woman wants to contribute to breast cancer research, how would you advise her to go about it?

Brenner: Look at what kind of research you want to fund then look at who’s doing that and who doesn’t already have enormous access to money. If you don’t know who’s doing it, contact a breast cancer organization in your area and ask.

Also, think about whether or not the organization is getting any results for the money that is going to them. What can they tell you about how successful their programs are about getting to the bottom of this problem?

Brenner: Research is a big universe. What makes signing up for a walk or sending in yogurt lids appealing is that somebody else is making decisions for us about where to put the money. But as long as we leave those decisions in the hands of those who are not directly affected by breast cancer we will continue to throw money down a black hole. Remember: Activism works by multiplying the affects of a single action. It is the power of individuals to create change.

*Note: The interview has been edited for length.

A headline in today’s New York Times got my attention: Medical Errors May Cause Over 250,000 Deaths a Year. I didn’t die from my breast cancer surgeon’s medical error, but I did get a firsthand look at how these errors are glossed over by hospitals and insurance companies alike.

Short version: In March 2009, my breast cancer surgeon gave me a double mastectomy but missed the cancerous lump. I discovered the error a week after my surgery when the surgeon removed my drains and, reflexively, my fingers flew to the spot on my body where the lump had been and — gulp — it was still there. (Here is the blog post.)

My lump had been close to the skin, high on the breast. Six o’clock. The lump’s location meant I wasn’t a candidate for a lumpectomy. So, I chose a double mastectomy without reconstruction. Six weeks after my initial diagnosis, I had no breasts but the pea-sized lump of breast cancer still sat brazenly on my chest.

And so began my crash course in how to advocate for yourself in the surgeon’s office. In short, I refused to leave until the surgeon acknowledged his mistake, took accountability for it, apologized and scheduled a do-over mastectomy. (This is a big part of my memoir FLAT…and is way too long to detail here but suffice it to say it was a horrifying and traumatic experience.)

Two months later I got a lesson in how insurance companies deal with medical errors. Paperwork arrived in the mail showing my surgeon billed my health insurance company his full fee for the do-over mastectomy. I called the company to tell them they should deny the charge. After all, it was the surgeon’s mistake. Why should he profit from it? The insurance rep told me it wasn’t his job to parse what was or wasn’t a mistake. If the billing made sense, they paid it. And, just like that, my mistake was recast as a recision. In the records, my breast surgeon simply “went back for more tissue.” No one mentioned it again.

I was a health journalist. I interviewed three surgeons for the job. I chose the one with the most experience and the best credentials. I did everything I could possibly do, except control for human error. The NYT article reports that if medical errors were considered a disease it would be the third leading cause of death in the US behind heart disease and cancer. Whoa.

No one expects health care practitioners to be perfect but 250,000 deaths a year? We can do better.