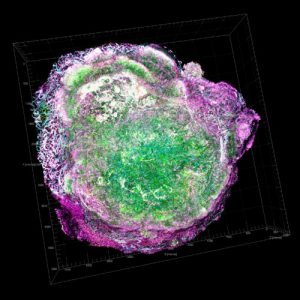 I’ll hazard a guess that all cancer patients would skip chemotherapy if they could. The hazy hours in the infusion suite, the body-numbing fatigue, the brain fog, the baldness. And that’s just the short-term effects. Chemo’s toxic legacy can lead to permanent nerve damage, heart failure, and even other cancers, such as leukemia.

So I was heartened to see this week’s headline in the New York Times “Gene Tests Identify Breast Cancer Patients Who Can Skip Chemotherapy, Study Says.”  The reporter, Denise Grady, told of a new study validating the usefulness of genomic tests, gene tests that measure markers of tumor activity and aggressiveness. “The so-called genomic test measures the activity of genes that control the growth and spread of cancer, and can identify women with a low risk of recurrence and therefore little to gain from chemo.”

But my optimism quickly faded. These weren’t new tests. Or a new breakthrough. Instead this was research done on existing genomic tests, the ones that doctors have been using for the past decade. The same type of test performed on both of my breast cancer tumors. While I applaud the much-needed research, I wish the headline felt more apropos.

I was diagnosed with breast cancer twice. First in 2009 at age 38 and again in 2010 at age 39. Because I was under 40, my insurance company covered genomic testing. (I was lucky.) Like the majority of breast cancer patients, my tumor was hormone sensitive and her2 negative, making me an excellent candidate for the tests. My doctors assured me the results of this high-tech gene test would clarify treatment decisions, especially in relation to chemotherapy. Do I or don’t I steep my body in a toxic chemical brew?

For two weeks, I pinned my hopes on this test. How could I not? The results could be a “get-out-of-jail-free card.” One test could save me months of suffering and god only knows what kind of long-term ill effects. Even if the test showed an aggressive tumor at least it would clarify my treatment plan. “Full attack!” Was easier to swallow than a wishy-washy “you may benefit, but you may not.”

My greatest fear, next to death, was making an ill-informed treatment decision I’d come to regret. I clung to my doctor’s promise that the genomic test would mitigate that risk.

And so, when my oncologist gave me the results, I didn’t know how to process his proclamation that my tumor was in the “gray area.” My cancer was neither the most aggressive nor the most innocuous. It was neither the straight-A student nor the drop out. My tumor was a solid C+. If my tumor woke up and decided to apply itself, it could kill me. But chances were good it might nod off in the back of the class.

I got this middle-of-the-road result not once but twice. The first time I skipped the chemo. The second time I signed on with equal parts gusto and terror. But, even with the gene tests, my decision came down to a coin toss.

Am I hopeful that these tests will save tens of thousands of women the pain and suffering that is chemo? Yes. More information is always better than less. Do I think a newspaper headline, even an article, can capture the emotional and scientific complexities of chemo’s risk/benefit analysis? No. With all things, even fancy genetic tests, your milage may vary and mistakes will be made.